Sgt 43780 Notts & Derbys Regt., later Sgt 43734 Leicestershire Regt. Report in Penistone, Stocksbridge & Hoyland Express 12 May 1917, that his older brother Pte T Whittington, KOYLI had been wounded in the arm in France and was in hospital in England. The same newspaper reported on 3 Nov 1917 (page 8) that Pte D Whittington was home on leave having seen over 12 months of active service, and prior to enlisting he was a butcher’s apprentice at Hathersage. Awarded the Victory and British War medals.

Born 1895 in Ecclesfield, his father Charles Whittington was landlord of the Travellers Inn, Potter Hill, High Green during all of WW1,

KERR, Robert. Dr T4/040878 RASC Attached 74 Field Ambulance. Enlisted 17/9/1914 but not called up to Bradford in ASC until 7/1/1915 and went to France 30/8/1915. He was there, apart from some short periods of leave, until 8/6/1919, and was demobbed 18/7/1919. Born August 1894, Douglas, Lanarkshire, Scotland. His father and N of K, John Kirk Kerr, living at Monreith on his enlistment, which was then altered to Yarncliffe Lodge, Padley, on the Longshaw estate, where he probably was for most of the war, before moving to Ringwood Hall farm, Brimington, Chesterfield. Robert’s brother James Gold Kerr also served.

BRIGHT, Malcolm. Became a Merchant Seaman before a Lt in the Royal Navy Reserve. Born 1876 at Sheffield, married at Hathersage on 11/12/1916 to Annie Louisa Dimbleby living at Yarncliffe, Fox House, and b 1885. Witnesses were Rev E J H Brooksbank and John Smith. Malcolm was initiated into the Royal Brunswick Masonic Freemasons Lodge on 12/1/1914 when an Officer in Merchant Service. His parents were Joseph and Elizabeth Anne, living at Dore in 1881C. 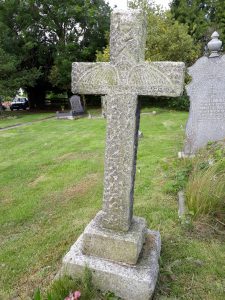 He is buried at the Family Church cemetery at Wolvey near Hinckley and remembered on a memorial in Longdon St. Mary’s Church. b Wolvey 1891, to Henry Fraser James and Mary Georgina Cope-Arnold of Wolvey Hall. 1901C at Oak View Boarding School, Hathersage.

DENSON, William Henry. †  ≠ Pte 7056  1st North Staffs Regt (Prince of Wales Own). Was a regular soldier before WW1 and on 1911Census he was serving in India. He went to France just after the outbreak of war on 10/9/1914. KIA 31/7/1917 age 33. Remembered on the Menin Gate Memorial, Ypres, (panel 55). b1884 Newcastle under Lyme. His daughter Mary Catherine and her mother Dora Ann Wilson were both born in Hathersage, and their descendants still live in the village.

DOHERTY, Frederick Albert. † ≠ Pte 748036 5th Canada Mounted Rifles. Quebec Reg’t).D of W 9/4/1917 buried  Écoivres Military Cemetery, near Arras, France where his age is given as 20 (but he is shown as born in 1895 at West Bromwich on1901C, when the family of six was living in Birmingham. By 1911C he was in Canada. His mother was Lucy Hudson, b 1873 Hathersage. In the 1871C her father Joseph was proprietor of the Millstone Inn, Hathersage. She had four children who all went off to Canada in 1910, although earlier in 1910 the youngest child Norman was in the Hospital wing of the Workhouse in West Derby. Father Frederick nowhere to be found. 1911C mother, age 38; Inmate Walton on the Hill Workhouse, Liverpool, but in 1917 his mother Lucy is shown on his grave record as living at 47 Forest Lane, Stratford, London.

GREENWOOD, Joseph. ß Щ      Although shown as Joseph on the Bible Class board, it has not been possible find anything of Joseph’s military involvement, b 1882 at Glossop. Son of Albert Greenwood b 1861 Glossop, and Emily (née Higginson – although called Newton when she was born) b Hathersage, and he married Minnie Winterbottom (Josiah’s wife’s sister) b Outseats. On both the 1901C (living in Norfolk) and 1911C Joseph is listed as a railway contractor. The reference to Joseph on the Bible Board probably should read Josiah. The confusion probably arose because of a mistake by the military records where the service medal and award rolls show Josiah Greenwood Dvr 72017 RFA, and Pioneer 197143 RE (which would fit with Josiah being a Navvy) and the same numbers & regiments appear on the medals list for Joseph Greenwood.