THORPE, George. ✟ Pte 7300 KOYLI, Captured Mons 24/8/1914. POW Rohrbeck Camp, supposedly died of wounds 25/10/1917, although according to POW records he was captured uninjured. Buried; Berlin South-Western Cemetery, Germany. b1885, lived at 44 Wallace Road, Sheffield (his sister’s address). He may have been a serving soldier prior to the outbreak of the war, brother of Frederick and Charles. their father John, b Hathersage in 1855, lived at Bean Row Hathersage in 1861C and died in Sheffield 27/5/1915. 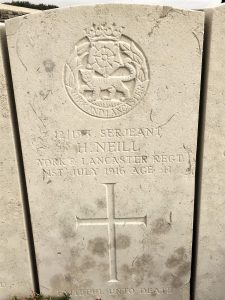 Cemetery, Puiseux. b1874 Sheffield, son of Robert Renton & Emily Margaret Neill, of 21 Whitworth Road, Ranmoor, Sheffield. 1911C a tailor, living at Nether Padley, with his parents, brother & sister. There is a plaque in St Helen’s Church, Grindleford, commemorating him and the fact that he used to preach there.