Cpl PS/9953 Royal Fusiliers (London Regt) awarded MM. (PS refers to ‘Public School’ and only applies to Royal Fusiliers and Middlesex Regts,.)  b1895 Hathersage. son of John and Martha Perkins, brother of Edwin, Charles, Percy, Sidney and Walter Perkins. 1911 Census for Wales living at Coedffranc, Glamorgan. Their father was Contracts Manager for the Railway. Only thing found in the papers is report on his trial for ‘Breach of Promise’ in the Western Mail 18/11/1930 p5.

son of John and Martha Perkins, brother of Charles, Lionel, Percy, Sidney and Walter Perkins. No military found for him. b1888 Wingford, Somerset. Family living in Hathersage at least 1890-1895.

Flight Sgt RFC died following an air crash. in Cirencester Red Cross Hospital on 28/4/1918 (Western Mail 3/5/1918 funeral report). b 1885 Featherstone, 1901C at Hathersage. 1891C son of John and Martha Perkins, brother of Edwin, Lionel, Percy, Sidney and Walter Perkins. does not appear on 1911C.  Records for him seem very scant. Family lived in Hathersage at least from 1890/1895 as three brothers were born there during this time. Their father was a railway contractor, and presumably was employed on the new line being built through the Hope Valley around this time. 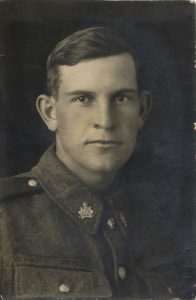 1090 Pte Canadian Divisional Mounted Troops 8th Bn. b1891 Padley Wood, Hathersage. 1901C he was in Croydon and 1911C in London. He then emigrated to Canada in 1913. He received his discharge papers on 30/5/1919 in France. From there he went back to the UK and to his wife, Margaret Alma Mann, (whom he had married in Feb 1919, presumably while on leave) and to his sister and Mother, who were living in Essex. Then, with his wife, he went to the US/Canada?  They were certainly around Buffalo NY because he was granted a divorce there in 1927, approximately five years after Margaret went missing, presumed dead. (There was a suggestion she had fallen over Niagara Falls?). George certainly believed her to be dead. He ended up in Savannah Georgia USA. In 1928 (a year after his divorce), he married Mrytis Garfield of Savannah. In WW2 he still lived in Savannah Georgia, as part of the security services, which was all apparently a bit mysterious. His sister Jessie also went to Canada and farmed there. His other sister Margaret was also born in Hathersage. Their father was a railway civil engineer / tunnel manager. There is much more detail of him on the Ancestry.co.uk website.. 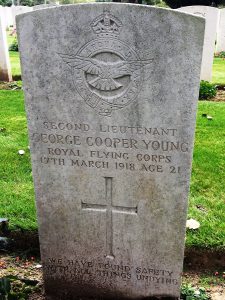 Pte 17461 East Yorks, discharged 15/8/1916 as medically unfit due to GSW to waist. He was refused a pension as the Army alleged the wound was self-inflicted. He maintained he was cleaning his rifle when it went off. b1896 Sheffield. He was a fitter in a pit. Brother of Henry, above. Their mother was Mary Jane Richmond, b 1864 at Hathersage, 1871C living in Cabbage Row, Hathersage. Her husband Frederick Yates, died 1904 and she remarried Mark Darling 1908. 1911C living in Sheffield.

Д On the Wesleyan Memorial 1922. She was from 12/7/1918 until 13/9/ 1919, a shorthand typist in the Women’s Royal Air Force (WRAF). She joined in Doncaster and was demobilized from Lympne in Kent, age 20. This would seem to make her the first female from Hathersage to belong to the military and certainly to the Air Force.  b Sheffield 1/11/1898 (possibly Millhouses Road).  Listed on the 1911C as Irene Wright, living with her grandparents (the Harrisons) in Sheffield. According to the family tree her mother Clara Wright (neé Harrison) died in Hathersage 1908. Her father had died in 1904. The Harrison family who lived in Hathersage were keen Methodists, and Kate (In later life, she was always known as Renie), and William Snow (Billy) were married of the old Wesleyan Methodist Chapel, (now demolished and replaced) in 1922. Renie met her husband while in the forces.

She was an Aunt to Peter Manning’s Mother, who said she spent a few summers with Renie and her children in Hathersage in the first few years of WW2, and she thinks their house in Hathersage was bequeathed to Renie at some time. Further research has shown that in 1941 Renie received no less than three bequests, and 9 Park Edge and ‘The Cottage’, Baulk Lane (now a listed building and recently renamed ‘Further House’) are mentioned. A maiden Aunt Katie (aunt of Renie), probably Kate Evelyn Harrison, (b 1859 Sheffield) who was living in ‘The Cottage’ when she died, left nearly £2,800 and a property on Roslyn Road to Renie. Kate Irene Wright’s ‘Harrison’ family did not move into the village till after the 1911C, Probate and family tree records indicate that in 1915 they were living at Park Edge and Roslyn Crescent.

Served with the Merchant Navy during WW1. b 1898 Rowsley. His father Luther Buttery, b 1873 Hathersage and 1891C living at Besom Lane, (1911C he was at Rowsley, a signalman). Cousin to James Luther above, and to Lancelot William Hancock, Percy and Sydney Skerritt, and Luther Priestley below.