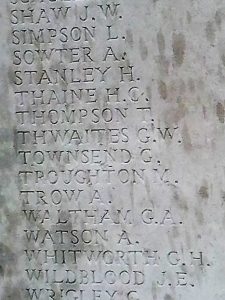 b 1894 as ‘Jeffrey’, Bretton Clough, Highlow, appears on 1901C as ‘Jeffory’ at Oakes Farm, Highlow.  Worked as a gardener in Sheffield, brother of Maurice and Ellis Townsend, and Lottie, who married Wllis Wilson of The Farm, bottom of Hathersage village Main Road. His older brother Joseph, it appears was not called up. Sons of Joseph & Fanny Townsend whose family had been at Bretton Clough for some 200 years, but recently (1917) of Coplow Dale Farm, Hazelbadge, Bradwell. (Information from Geoff Wilson, Grandson of Willis Wilson, who had ‘The Farm’ at the bottom of the Hathersage Village, now called Hathersage House and who had married Lottie Townsend, the sister).

Interestingly the incorrect story passed down from the Wilson/Townsend family was that Geoffrey was lost when his ship was torpedoed.