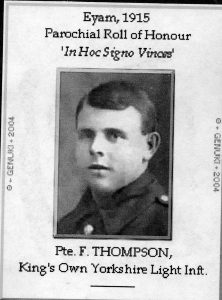 21947 Pte K O Y L I. He joined up soon after outbreak of war, along with Cpl Enoch Hallam (Curbar) and Pte Fred Uttley who was killed in the engagement in which Frederick was himself severely wounded, in the Nov 1916 Somme Offensive. Frederick was buried for several hours after the trench was blown in by a shell, and was later removed to the Sheffield Base Hospital, suffering from internal injuries and ulcerated eyes. He returned to a Military Hospital in Blackpool. (DC 18/11/1916 p1 & 4; wounded).  b 16/12/1894 at Fox House, Hathersage, brother of George and Percy Roberts Thompson, sons of Alfred Roberts & Maria (Garlick) Thompson and cousins of Alfred, John Thomas, Harold and William Henry Thompson. His sister Agnes married James Hulley, shown on this photo with Frederick, Enoch Hallam and possible Fred Uttley. He was a member of Grindleford Brass band. 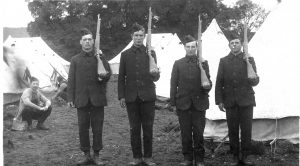