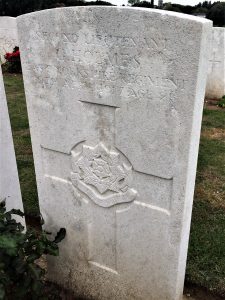 ✟ ß Щ  2/Lt. 1 & 3 Bn East Yorks Regt.  K.I.A. 9/4/1917 age 21. Having breached the Hindenburg Line he was struck by a shell and died instantaneously at the Battle of Scarpe, near Arras. Grave; Wancourt British Cemetery, France, ref; 8-A-7, gravestone engraved; ‘HE IS NOT DEAD SUCH SPIRITS NEVER DIE’

His original war grave wooden cross hangs in Hathersage Parish Church. b 1896, a native of Meersbrook Park, he was educated at King Edwards VII School, Sheffield, where he was Head Prefect 1913-1914, and had been the goalkeeper and wicket keeper in both the schools XI’s. He took up his Classical Exhibition at Magdalen College, Oxford, for a term in 1914, before deciding he ought to volunteer for the army. Son of Robert Wilson Holmes & Annie of ‘Ivylea’ Roslyn Crescent, Hathersage.  (His mother was actually called; Sister Annie Holmes). He also lived at ‘Waysend’ Cannon Fields.  A relative was Miss J Haigh, Hoyland, Barnsley.  The family farm was at The Gate House, Upper Hurst, for a number of years. There is a photo of him p 28 of WHW2W.