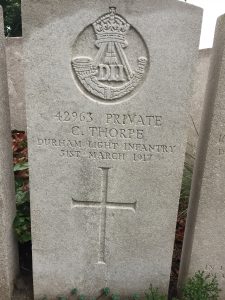 his wounds in action in France, and died on 31/3/1917 age 24. (there is some discrepancy about his age). Grave; Bethune Town Cemetery, France.  b 1893 & baptised at Hathersage, son of Charles and Mary (b Hathersage). The family lived at Kimber Court for many years. Brother of Charles Henry, George Elliott (who went to Greens House Farm) and Joseph. Sister Annie married Frank Hutchinson, Brown Hills Farm, Fulwood.